skip to main | skip to sidebar

Several members of Main Street of Fremont were driving home from a Nebraska Main Street-sponsored training on public art projects when they had an idea. It sounded fishy at first, but it turned into an outlet for local artists to display their work and raise money for a downtown streetscape project.

That’s the refrain from “The Biggest Fish of Nebraska’s River Platte,” the theme song for the “Fremont, Big Fish of the Platte” public art project which featured more than 30 brightly painted six-foot fiberglass catfish which adorned street corners throughout the eastern Nebraska city. A subcommittee of the Main Street board was formed to tackle the project. The Chicago company that started much of the national street art craze, Cowpainter’s Inc., happened to have a number of catfish that had been destined for a project in an Illinois community that had dropped the plans. Hence, the first fish blank to arrive in Fremont was dubbed “Quincy.” He became the poster child for the project. The committee hooked up fish artists with sponsors as the project finally began to float. Many were local, but several were done by high school students from Pawnee City in southeast Nebraska. The advertising manager for the Bellevue newspaper did “Fill-er-up” as a gas station attendant from the era of the heyday of the Lincoln Highway. “Sole of the Platte” was commissioned for the owners of Buck’s Shoes in downtown Fremont and featured a fish adorned with whimsical footwear and begged the question, “can you teach a fish to heel?”Imagine having fun while raising money to do a project that will benefit all the residents of a community by enhancing the downtown where they live.
Posted by NebraskaMainStreet at 1:09 PM 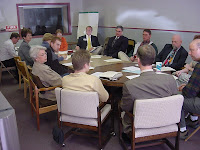 You have to get up pretty early to keep up with the folks at Main Street Wayne. The All Hands Committee, the governing body of the organization in this northeast Nebraska college town, meets every Tuesday at 8 a. m. It adjourns at 9 a.m. and whatever is left on the agenda generally rolls over to the next week. And, the committee votes every so often to decide if they want to keep meeting every week at the early hour ... and the answer is always the same. Yes. As one member put it, the group has been so successful and has such great momentum they are afraid NOT to meet weekly. The schedule is invaluable in the days and weeks prior to a promotion or other planned activity. Rather than having to put a special meeting together to talk about the annual Christmas parade of lights, the event just naturally comes up on the weekly agenda. That avoids any last minute surprises and makes for a smooth flow of assigned tasks.
Main Street Wayne has established a strong working relationship with Wayne State College. Members of the faculty and student body serve on the All Hands Committee. Main Street has also added a downtown element to the nationally recognized Chicken Show. It’s called Henoween and it happens the night before the annual Chicken Show when several blocks of downtown are cordoned off for games such as frozen chicken bowling, a talent show, a free live stage show and food vendors, carnival rides and the ever popular painted concrete chicken art auction. For the All Hands Committee, it’s all about downtown.
Posted by NebraskaMainStreet at 1:05 PM

An historic building constructed in an alleyway between two others has been revived thanks to the vision of a property management company. The Christensen Company renovated the long-vacant building on a side street in this historic downtown to reflect the flavor of by-gone days. In the process, the showcase property became a great corporate headquarters. Boarded-up windows on the second story were opened up and a traditionally appropriate storefront was added at the street level. An interior stairwell was built to give access to the second floor, alleviating the need to use a common stairwell in the building next door. Dramatic use of wood and brick and natural lighting adds to the charm of the remodeled space which now houses offices for Mark and Laurie Ferraina and other employees. This renovated space has served to attract shoppers to the historic Main Street District while testifying to one family’s pride in historic preservation.
Posted by NebraskaMainStreet at 12:52 PM 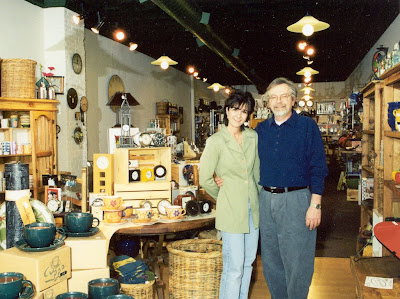 If Mike Ford has his way, there will have been a member of his family in business in the downtown of this southwest Nebraska community for at least 50 years. Ford, whose parents operated a jewelry store downtown for 34-years, says he hopes to run his unique home and kitchen store, Knowlen and Yates, for at least 16-years. Ford gave up a corporate job to move back to his hometown and open shop on the brick streets of Norris Avenue in the heart of downtown. He and his wife Laura, who runs Country Floral and Gifts across the street, also set the pace for retail in McCook with innovative window and store displays. Their remodeling inside both buildings has drawn approval from customers and praise from retail and design professionals. Mike Ford said he has discovered that nearly half of his customers come to McCook from adjacent states. That, he says, has given him insights into how to market and how fortunate McCook is to be such a retail draw.
Posted by NebraskaMainStreet at 9:26 AM 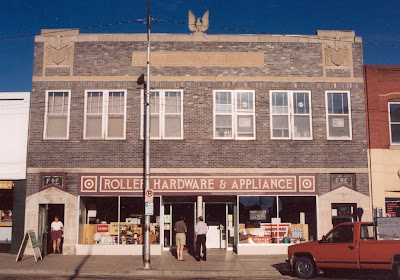 Ever wonder what a simple change in the way a retail building looks could do for business? Stop in at Roller Hardware in downtown Alliance and find out. Harold Roller, the building’s owner, decided that a more historic look to match other storefronts in the Panhandle community was in order. The white tin and bold red plastic letters and backlighted signs smacked of the 1970’s. Besides, cracks in the signs had allowed them to attract bugs and dirt and shine less brightly than when they were new. Removal of the tin revealed two empty spaces above the door pediments in the building which once housed the Eagles Lodge upstairs. The lodge had moved elsewhere, but when club members saw how good the building looked, they returned the stained glass pieces which said “FOE” on them to their original space above the doors. The building owner had a local artist paint a new sign for the building using lettering similar to that in the name block atop the second story of the façade. For less than $1,600, the building owner gained a more appropriate look to the building, more closely matching the fabric of surrounding buildings. Partial funding for the project came from a façade incentive grant provided by the Alliance Main Street program. Nationally, retail experts agree that a new façade, sometimes as simple as new paint or awnings or signage, can mean as much as a 10 percent increase in retail traffic for a business.
Posted by NebraskaMainStreet at 6:15 AM

Downtown Construction So What! (Ogallala, Nebraska) 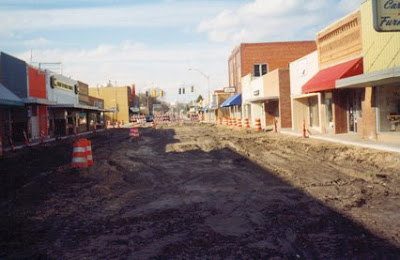 If the world gives you lemons, make lemonade. Just ask business owners in this western Nebraska community who survived a massive downtown construction project which gave the community new infrastructure, curbs, gutters and sidewalk, but also left access to the front doors of businesses virtually impossible for several months. The Ogallala Main Street program developed a theme, “Downtown Construction Ahead – So What!” sponsored contests and retail promotions, and walked away with a video production which is now used by the state Department of Roads to prepare other communities facing similar projects. It started with a massive advertising program and encouraging local businesses to promote the use of their back doors, said Ogallala Main Street Manager Kathy Zeller. In addition, the Main Street program helped develop games and promote the awarding of customer discounts if the shopper was wearing a hard hat or a flannel or denim shirt. Prizes were awarded to customers who found their way through a maze of detours and construction barricades or walked a long distance to shop. It worked. One businesswoman who offered tea and cookies to customers who used the back door, said her retail sales during the one month (June) her business had only back-door access were the highest of any June in the 10-years she had been in business.
Posted by NebraskaMainStreet at 1:57 PM 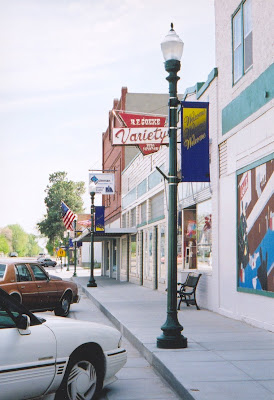 Visitors to this Sandhills community are reminded of the past when they see Main Street. Historic reproduction ornamental lighting, new infrastructure, landscaping and benches create a very pedestrian-friendly environment. Funding for the project was made possible largely because of the community’s affiliation with the Nebraska Main Street Program, said Mayor Mike Skulavik.The improvements are the latest in a plan to attract an anticipated influx of tourists from the Cowboy Trail which runs adjacent to the north edge of the downtown. Through the cooperation of the city administration and the Bassett Main Street program, the old Bassett Creamery building near the trail has been preserved and now houses public restrooms and showers for the use of hikers and bikers. The trail, built on the abandoned roadbed of the Chicago & Northwestern Railroad across northern Nebraska, will be the longest in the United States. In addition to the creamery, a picnic shelter with tables was built next to the trail. Behind the rehabbed Rock County Oil Company building is a park featuring a boardwalk of antique western storefronts which depict Bassett of yesteryear.Because Bassett is already developed as a trade center in the area, visitors are expected to shop for the essentials they’ll need as they venture into more sparsely populated areas of the trail.Skulavik credits the Bassett Main Street program and a lot of volunteer commitment to making the community thriving and attractive.
Posted by NebraskaMainStreet at 1:55 PM